How the NRMP Match algorithm works

Are you curious how the Nobel Prize-winning NRMP Match algorithm works? Here's my example highlighting the story of three students:

Students Alice, Ben, and Carlos apply to various numbers of IM programs through ERAS. Alice gets ten interviews, Ben gets zero, and Carlos gets two. Again, the NRMP has no idea how many. Alice has some good and some bad interviews, but decides to rank all programs. Ben ranks a dozen programs that he wants to go to, even though none of them interviewed him. Carlos only ranks one program (which happens to be a program that both Alice and Ben have ranked).

Match algorithm time. Ben has only ranked programs that don't have him on their lists. No matter how many he tries to rank, there's no possibility of a corresponding match, so he ends up unmatched.

The algorithm tries to match every applicant to their top choice and does not "count" how many programs they actually ranked. If an applicant's top choice has an open slot immediately, the match happens. Because Carlos has 13 people ahead of him at Tufts fighting for those five slots, there's no way that the first iteration will work for him. Alice also fails to match at her top choice (Harvard), and let's say that all of the spots there were instantly filled.

On the second algorithm iteration, Alice's top choice of Harvard is completely blocked. Her #2 choice (Stanford) automatically becomes her new #1...the program will not try to match her at Harvard again because it's impossible. It tries and failed to match her this time, but not all Stanford spots are full, so hope isn't lost yet. Concurrently, the algorithm tries to match Carlos to Tufts. He doesn't get matched this time either, but he's moved up to #12, since one person higher than him near the top of the Tufts list matched to her own top choice somewhere else. Interestingly, Alice is now at #5 on the Tufts list, which means the spot is potentially hers, but the algorithm hasn't tried matching her there yet.

A few algorithm iterations later, and Alice's second choice is full without her matching there, Tufts has matched three people out of five, and all of our heroes are still waiting...though it's just been a few microseconds.

A few more iterations and Alice's third choice (UCSF) is full. Carlos moved up a couple of spots. Tufts has matched its original first, second, and fourth choices, with the third matching elsewhere. Alice and the person originally in the ninth rank now have spots "held" for them due to the original fifth, seventh, and eighth on the list matching elsewhere, and the two of them moving up the ladder.

On the next iteration, Alice matches to Tufts. It's her fourth choice, but it was "virtually" her top choice since the three programs above it filled and she had no chance of matching there. She takes the fourth spot.

A couple more iterations later and the fifth spot is filled (that man had ranked another program higher, and his spot at Tufts was "held" for him while that other match tried and failed to happen). Carlos is unmatched since Tufts was the only program he ranked. Interestingly, the other program he interviewed at had ranked him quite highly, and he would have matched there if he had bothered to rank it. Ben never had a chance of matching since he didn't interview and no programs ranked him. Both men can try to find a spot through the Scramble/SOAP.

And thus concludes a *very* realistic scenario. The NRMP has their own sample scenario on their website if you want to read it.


My congratulations go out to the creators of the current NRMP Match algorithm, who recently won the 2012 Nobel Prize in Economics! Click here for a short and accessible description of this achievement, and click here for the full journal article about the algorithm's history and development.
Posted by David Backman at 4:28 PM 3 comments:

September 15 is not the ERAS application deadline!

September 15 is not the ERAS application deadline! Although it is the first day that you can send out your applications, you are not required to do so. Residency program directors will be downloading applications throughout the rest of the month until they can retrieve the MSPEs on October 1, and quite possibly even beyond that date.

What does this mean? Instead of submitting a poorly edited personal statement and an incomplete Common Application Form on the 15th, you should take the time to have your application professionally reviewed. Residency directors don't need your application immediately; they would prefer that you take your time and submit your best effort later this month.

I've been supporting medical students since January 2001, and I would be happy to share more than eleven years' worth of expertise with you. I will give you feedback on your personal statement and ERAS application, and if you'd like, I can go deeper and tell you how residency directors might react to your MSPE and letters of recommendation too. Please contact me for a free consultation. It's not too late to have the residency application you deserve!
Posted by David Backman at 9:25 PM 4 comments:

One of my clients recently asked me whether joining professional groups could help her application. She also wanted to know if joining both the American College of Physicians and the American Academy of Family Physicians would help or hurt since they're focused on different specialties.

First, I think that it's most important to question why you are joining a group. Are you still in medical school and you want to learn more about residency in a certain profession? Great; you should definitely join! Are you a graduate who has decided on a field of interest and you want to interact with other professionals? That's another great reason to join.

Or are you only joining this group in order to list it on your CAF? If so, that is a bad reason and you might not want to do this at all. Padding your resume with groups that you've joined simply to impress program directors might actually cause you trouble. What would you do during an interview if someone asked you "Why did you join this group?" You'd have to say that you only joined to strengthen your application. That's not enough.

So before you join, think about what you can get out of these groups. Are you planning to attend conferences, read their journals, collaborate with or learn from members, make professional connections, and learn more about those fields? If you can honestly answer "yes" to some of those, and you will be able to comfortably describe your involvement if asked about it during an interview, then joining might be the right idea after all.

As for joining two different associations, remember that anything you list on your CAF will be seen by all programs you apply to, so FM programs will know that you joined the ACP, and IM programs will know that you joined the AAFP. Is that a bad thing? Not necessarily, since many people openly apply in both FM and IM, and both give you the potential to explore what it means to be a physician in a society increasingly concerned with primary care medicine. But if you're applying in both surgery and psychiatry, but don't want the program directors to know that you're doing that, then listing the American College of Surgeons and the American Psychiatric Association on your CAF might hurt you.

As always, please contact me directly, and I can discuss your specific application during a free consultation. There's no single answer to these questions or for any issues relating to your residency application; let me come up with a customized approach for you.
Posted by David Backman at 3:25 PM No comments:

The 2012-2013 residency application cycle is about to begin! If you're applying for the first time, or even if you've gone through this process before, these are the crucial dates that you should be aware of. Please note that several of these dates have changed from previous years:

I know this is a lot to process, so please contact me for a free consultation and I'll help you!

Tomorrow is the deadline to submit and certify your final rank list with the NRMP. Here are the key points that you should be aware of:


1) You should rank every single program you interviewed at, unless you would rather be unmatched than go to a specific program.


2) You should rank the programs in the order that you hope to match to each one. The NRMP algorithm is skewed in the applicant's favor; it will not hurt you to rank your favorite program first, even if you think you have no chance of matching there.


3) The rank list you submit and certify on the NRMP website is a binding commitment. If you match to a program on your list, that's where you're going.


4) The deadline for submitting and certifying your rank list to the NRMP is 9:00 PM Eastern time on February 22, 2012. However, I strongly suggest that you certify your list well in advance of that deadline. Power failures and bad Internet connections have caused trouble for applicants in the past, and if you don't meet that deadline, there is nothing that anyone can do for you.


UPDATE: Yesterday, I posted the text you see above, and today the NRMP website went down for over two hours (see screenshot below), but they did not change the final rank list deadline. Imagine if you had only set aside those two hours to work on your list! 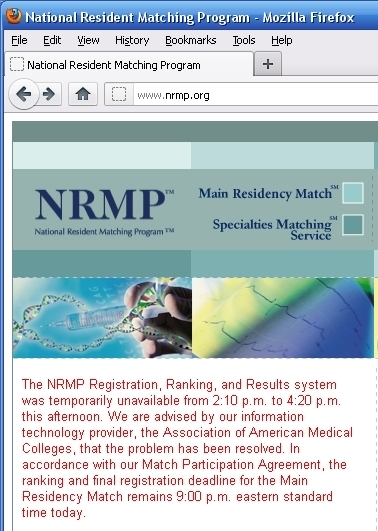 Posted by David Backman at 2:12 PM No comments: